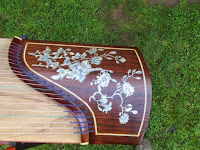 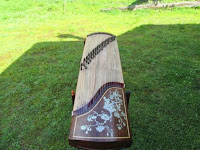 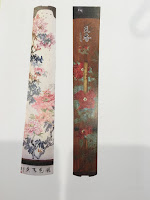 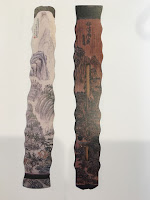 All Rights Reserved. For students practice only.
Please do NOT download or copy. Thank you.
僅供學生練習用, 版權所有, 請勿下載, 謝謝
Guzheng is the Chinese name of the 21-string plucked instrument. It has a rich history of more than 2200 years (originally from 25-string Se, 237BC), making it one of the oldest stringed instruments in the world that are still played today.

The scale is a pentatonic, 5 notes per octave: Do Re Mi Sol La. All other pitches can be pressed on the left-hand side. Therefore, it can be tuned to play any key, but C major, D major, and G major are the most popular keys for this instrument.

Chinese zither music is playing all over China in unique folk tones relating to the local dialect (language). It changes in pitch, up and down, language and/or dialect very much. Changes in pitch can be played on the guzheng by pressing on the strings with the left hand while the right hand plucks the strings.

Chinese music is what we call “title music or program music”. People will know the content of the music from the "title."

Happiness Canal to My Village is a piece of contemporary Chinese zither music that was composed in 1974. The music describes how China's mother river, the Yellow River, fertilized the soil to sustain the lives of farmers and their families, but sometimes flooded, bringing disaster. People overcame natural disasters, rebuilt their homes, and enjoyed the harvest of the crops.

High Mountain, Running Water is originally written around the year 700 BC and describes the flowing water through high mountains, another example of “title music”.

Autumn Moon over Calm Lake was originally a Cantonese opera. The music expresses the love for the natural scenery and becoming a masterpiece in Guangdong music.


Liuyang River is a famous Hunan folk song composed in 1951.

Cloud and Water is a folk song that describes the motion of clouds in the sky, and clear water flowing through the forest stream.

Busy Weaving is Cantonese music. The music was composed in 1955. It uses a variety of techniques such as squatting, tremor, slipping, squeaking, chords, and playing with both hands in the climax of the music.

Fishermen's Song at Eventide is classical music based on an ancient poem written in the year 649 and has been recomposed as Chinese zither music in 1938. The music depicts the sunset and the blue waves, the fishermen in leisure and self-satisfied, the fishing boat drifting away from the beautiful scenery.

Please do not copy or forward the articles/pictures without permission. However, you are welcome to credit and link back to this blog . Thank you.